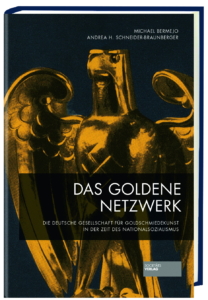 Order the book at Orell Füssli

The present study analyzes the role played by the Deutsche Gesellschaft für Goldschmiedekunst (“German Society of Artistic Goldsmithery”) during the period of National Socialism. For the “Gesellschaft für Goldschmiedekunst”, as the association is called today, the impetus to confront and come to terms with National Socialist history arose from the refusal of an internationally renowned goldsmith to accept a distinction with a ring of honor, with an allusion to the circumstance that some of the ring of honor-wearers during the NS period maintained close relations to the NS leadership. Up until the time of this refusal, 2016, professional reappraisal of the society’s history had been hindered by the rudimentary state of the society’s own records, its erroneous assumption that it had been a postwar start-up, combined with absent financial resources, on the one hand, and deficient scientific interest, on the other. The result of this was that essential information about the organization fell into oblivion.4 Now, though, the “Gesellschaft für Goldschmiedekunst” was called upon to face up to its “fascist past” and come to terms with it, so that the gaps can be filled in again. For the historian, the study that resulted from this is a case example that brings to light the nexuses of individual, society, and party interests to a wholly particular extent. The protagonists of this study succeeded in building up a “golden” network for their purposes.